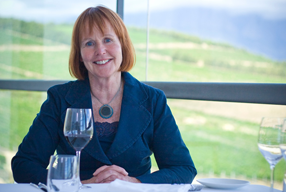 Su holds a BA Honours degree in English and Sociology from Stellenbosch University and a MBA from UCT.

Her career started in market research and moved into advertising, holding senior client service positions at Greys, J Walter Thompson and Delaneys. From 1990 she was involved in the marketing of deciduous fruit, first as CE of Fresh Concepts, then GM: Corporate Strategy at Unifruco and finally International Marketing Manager for Capespan.

Su has received international recognition for her work, including:

She was a founder member of the Wine Industry Ethical Trade Association (WIETA) and served on the EXCO as a board member from 2002. In 2007 and 2008, Su served as Vice Chairman of Cape Town Routes Unlimited.

Su was a co-founder of SHARE, a not-for-profit project aimed at promoting literacy and skills among previously disadvantaged communities, in 1990. She was a director of the organisation for 18 years.

Now she is the herd leader and director of thinkingseahorses.